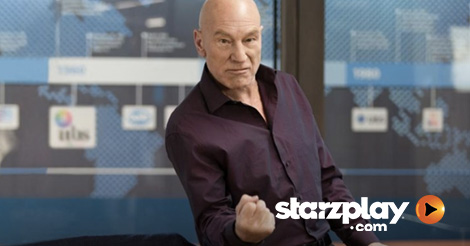 Have you discovered the greatness that is Blunt Talk? The much-loved Patrick Stewart stars as Walter Blunt, a cable news host with his own program. Blunt, a British immigrant to the United States, tries to advise Americans on how to live, all while dealing with his own issues behind the scenes. As of this week, the show is now streaming on STARZPlay.com and at the same time as in the U.S. Here are five reasons to tune in:

Patrick Stewart Does Things You Would Never Expect Blunt Talk covers a huge range of topics, with Stewart often found in the middle of each one. In season one, for example, Stewart picks up a transgender prostitute and drops his underwear while discussing bathroom technology. In one of the most recent episodes of season two, he dresses in drag and attends a party as a woman. Stewart is not afraid to fully encapsulate the character and potentially shock viewers with his actions.

One of the best things about sitcoms is the ability to invite special guest stars on set. Season two features minor characters played by Jason Schwartzman, Fred Armisen, and Moby, among others. Another surprising visitor is Stewart’s real-life son, Daniel Stewart, who plays a small role in both seasons.

Blunt Reconnects with a Lost Love Can someone so wild successfully reconnect with a person from the past? Season two features Cornelia (played by Lesley Ann Warren) as Blunt’s long-lost love. The episodes begin to examine his past and reveal a more complex side to his character. How will their romance play out?

Some shows live in a bubble, where nothing from the outside world touches them. Blunt Talk is not overly concerned with real-world events, but certain topics make it into the script. In season two, one arc includes the California drought, as Blunt investigates the politics and corruption associated with it.

Blunt is a Loveable Hypocrite

Stewart’s character has a completely know-it-all personality, and the point of his talk show is to give advice, whether solicited or not. He is extremely hypocritical, trying to explain how the world should operate and behave without having control over his own life. However, somehow this trait is not a complete turn-off and Blunt is loveable despite his flaws. Start streaming today to see how Stewart just might win you over.

4 Hilarious Teen Comedies You Have to Check Out