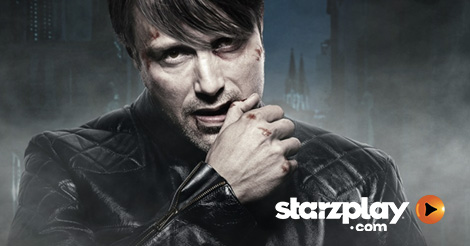 All three seasons of Hannibal are now available to stream on STARZPlay.com, but why is such a sick and twisted character so beloved? Here are four reasons that Hannibal is the best villain on television right now: Mads Mikkelsen skillfully portrays Dr. Hannibal Lecter, bringing the character’s genius and eccentric nature to life. He plays Hannibal as if he were the devil, not shying away from his sadistic nature. He is terrifying at times, both physically and psychologically, but with a certain wit that is almost endearing. Each episode picks away at the obvious exterior and dives beneath the surface, adding to the character’s complexities.

This NBC series, developed by Bryan Fuller, examines the story of Hannibal Lecter in a new way. Rather than beginning the first season with Hannibal as a well-known cannibal, Fuller and the writers chose to conceal his true being. This story of Hannibal’s life before his capture was previously untold, including how Hannibal began working with FBI investigator Will Graham (played by Hugh Dancy). Hiding this information from the other characters adds greater depth and interest to the show as well as Hannibal’s character. This show is gory and gruesome. At some moments, you may feel you cannot look at the screen, and yet you cannot look away. He hunts and attacks victims, murdering them in extremely dark ways. To top it off, Hannibal loves to cook, and his photo-worthy creations are completely sickening when one realizes the source of the ingredients. The violent imagery and amount of gore in the show is shocking for viewers but is all in a day’s work for Hannibal.

Having a Brilliant Mind Leads to Scheming and Surprises Hannibal is a skilled forensic psychiatrist, with a brilliant mind that allows him to stay at least one step ahead of everyone else. He constantly schemes, leaving others working overtime in an attempt to catch up. As a result, there are countless moments throughout the show that come as a complete shock and yet were planned and prepared for all along.

This ability to stay ahead of others is a perfectly villainous trait, as it makes his victims, colleagues, and viewers unable to fight back or respond effectively. Hannibal is not the kind of guy you want to have hunting you down, because you likely have no way to see what is coming.