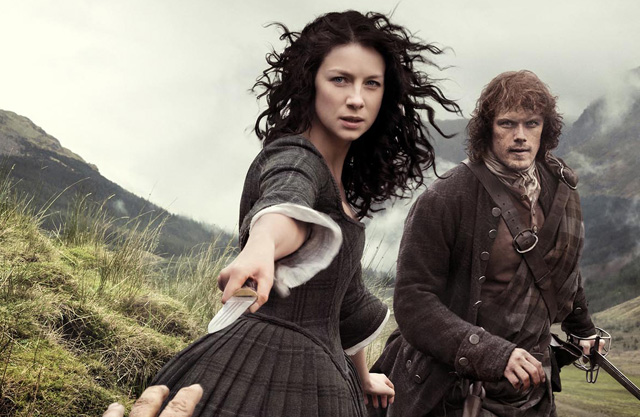 Outlander is a STARZ original television series, based on a series of novels by author Diana Gabaldon. The stories involve time travel, as the lead actress is thrown from 20th century domestic life to the brutal battles between Britain and Scotland in the 18th century. Here are four reasons to stream the entire first season of Outlander this weekend:

Have you ever imagined being transported back in time? Outlander follows nurse Claire Randall (Caitriona Balfe), who is torn from her husband and the life she knows in 1945 to an unknown environment in 1743. There, she must marry warrior Jamie Fraser (Sam Heughan), a passionate suitor who makes Claire’s love life even more complicated. She is torn between the two men, her new husband Jamie and her husband Frank (Tobias Menzies), who live in completely different eras. However, many viewers are Jamie’s side because Caitriona Balfe and Sam Heughan’s chemistry is hard to deny. The characters seem very real and in love, which creates countless swoon-worthy scenes.

No Need to Read the Books First

Although Outlander is based on a book series, the television episode adaptations make the plot and characters come to life whether or not you read the books. Binge watching is the best way to keep track of complex plotlines and budding character relationships. Plus, you will be right in the midst of Scotland, with its stunning landscape, beautiful accents, and action-filled battle scenes. Once the show ends, you can order the book set and relive the characters’ lives to your heart’s content.

There Is Plenty of Comedy among the Drama

Although Outlander has a complex plot and relies on the intricacies of time travel, there are countless humorous moments to lighten the mood. Unlike many period pieces where the dialogue leaves little room for humor, here the actors play off of one another and share many witty moments. Unlike other shows, where you may binge-watch a season and have to wait a year for the next, you will not have to wait long for season two of Outlander. Catch up on the first season now and then enjoy all thirteen episodes of season two, based on the book Dragonfly in Amber, as they begin to stream in April.

Outlander is a STARZ original series exclusive, available only on STARZPlay.com.