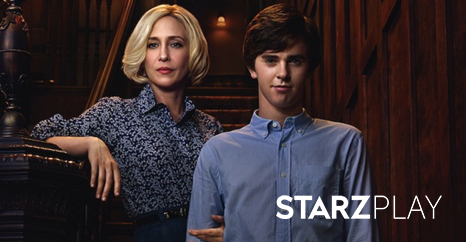 STARZ PLAY is adding new listings all the time, but there are some shows that deserve special attention. We’re rounded up five recently added television series that people should starting watching right now! There aren’t very many horror television shows, so it’s really exciting whenever one comes along. Bates Motel premiered with its delightfully disturbing first season back in 2013, and left audiences everywhere shocked with its graphic series premiere. The show is based on the classic Hitchcock film Psycho, but focuses on the relationship between Norman Bates and his mother Norma. It’s supposed to be a prequel to Psycho, even though the show takes place during modern day. For fans of classic horror films, crime mysteries, and/or psychological thrillers, Bates Motel is guaranteed to please. This sci-fi thriller is based on the 1995 film of the same name. 12 Monkeys is about a man, James Cole, in the year 2043 who goes back in time to try and stop a deadly plague that wipes out the majority of the earth. The Army of the 12 Monkeys is a mysterious and dangerous organization that unleashed the plague on the world, and who Cole must stop. With the help of virologist Dr. Cassandra Riley, Cole uses time travel, fighting skills, and wit to stop the apocalyptic plague from happening. Season one of the crime thriller Blindspot is now available for people to watch from the edge of their seats. The shows starts out with a strong and in-your-face premiere, with a naked woman covered in tattoos waking up in the middle of Times Square with no memory of who she is. This Jane Doe is a key part in helping the FBI as they try to solve her case, and in the process discover a huge web of crime that could change the world. The tattoos on Jane Doe are clues to her case, and lead FBI agent Kurt Weller on a dangerous mission. Although Mr. Robot won’t be available on STARZ PLAY until April, the show is still worth mentioning in the roundup. The critically acclaimed cyber thriller series is a show unlike any other, and has won many awards. Not only is the cinematography, soundtrack, and acting all superb, but the plot is amazing too. Mr. Robot is about a young man, Elliot Alderson, who is a computer engineer by day and a cyber vigilante by night. His social anxiety, depression, paranoia, and delusions not only make him a unique hero with problems that people can relate to, but his delusions also leave audiences wondering what is real and what is fiction. The Chair is unique in that it’s a competition documentary created by STARZ PLAY as a filmmaking experiment. The show follows Shane Dawson and Anna Martemucci, two up-and-coming directors who are given an identical screenplay, budget, and city to create original films.

STARZPLAY Partners with Ooredoo in Oman