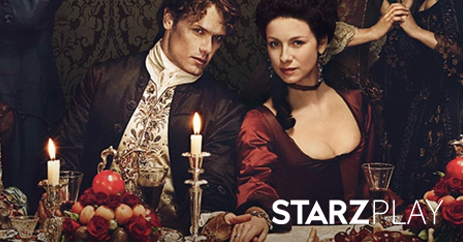 Outlander fans, get ready. The second season of the time-travelling period romance is now available on STARZ Play. For fans of Season 1 who’ve been anxiously awaiting the next chapter, Season 2 will not disappoint. Warning: Spoilers throughout! The brutal Season 1 finale may have been hard to watch, but Season 2 provides answers to some lingering questions. Will Jamie recover psychologically from the gruesome acts he suffered at the hand of Black Jack? How do Jamie and Claire fare in France? Will Claire’s pregnancy change everything? Will they be able to change the future? Will Season 2 continue to be as controversial and immersive?

There just isn’t another show like this on television. Whether it’s the 1940s when Claire served as a World War 2 nurse, battles during the Scottish-British Wars, or Paris during the 1700s, the plot unfolds during very different eras. The scenery, sets, and costumes are works of art that are beautiful to look at and give the show a sweeping, epic feel. History buffs will relish the details and everyone else will want to pick up a history book to learn more.

Time travel adds a cool, futuristic element to a show that primarily takes place in both decades and centuries past. Claire knows the destiny of the Highlanders and this information can either help or harm them and herself. Claire being able to put into practice the things she knows from being from the future is one of the most interesting things about the show.

Season 2 brings plot twists and jaw dropping moments as well as the graphic blood, sex, romance, and vengeance the series delivered in Season 1. With the populated cosmopolitan city of Paris as the primary backdrop, other layers are added to the plot.

The new season takes place in France during 1745 when a rebellion is being planned. Because she is from the 20th Century, Claire already knows what the outcome will be. How will she use this to her advantage?

Instead of being surrounded by the rustic scenery of Scotland they’ll be rubbing elbows with gilded French aristocrats. Where they once saw kilted Highlanders, the audience will now see fancy table settings, chandeliers, powdered wigs, and get immersed in all the politics that come along with a large, bustling city like Paris.

Outlander is a difficult series to define because there are so many elements to it that make it exceptional. For this next installment, leave a piece of their past in Scotland while they try to change the future in Paris. For anyone who was drawn in by Season 1, Season 2 promises to be just as intoxicating.

To see what happens next on one of the most unique shows on television, catch Highlander Season 2 now on STARZ Play. Don’t miss it and all of the other great movies and television shows available.