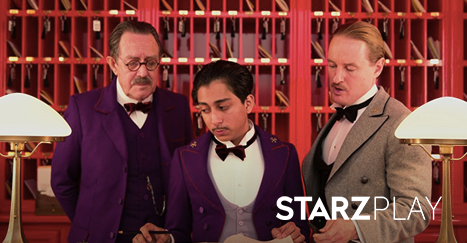 Even though there are a number of high-profile movies coming to you in 2018, they are hardly of any urgency – you don’t need to drop everything you’re doing to watch them.

Instead, you could spend your time staying up-to-date with your STARZ PLAY viewing, especially as we prepare to drop a handful of great movies from our site.

Top Movies to Watch Before They Expire This January

Get to your nearest screen – you’ve some urgent watching to do.

Spurred by a promise he made to his children, Walt Disney (Tom Hanks) is on a quest to obtain the movie rights to a top-selling book, “Mary Poppins”. However, Travers (Emma Thompson) – the author – is not willing to let her treasured characters be mangled into the Hollywood machines.

However, when her books stopped selling and she is in dire need of money, Travers is willing to let go. Catch the exciting Saving Mr. Banks on STARZ PLAY before it expires.

Gustave (Ralph Fiennes) is a hardworking hotelier who prides himself on providing exceptional services to his guests at The Grand Budapest Hotel. At this 1930 first-class hotel, all the customer’s needs are fulfilled.

However, everything changes for Gustave when his lover dies mysteriously and he is the chief suspect to her murder. How will he get himself out of this scenario?

Remember Wendy of Never Land? She’s all grown up with children in the Return to Never Land movie.

Unlike her little self, Wendy’s 12-year-old daughter has no interest in her lame Peter Pan tales. However, everything changes when Captain Hook captures the little girl and uses her as bait to capture Peter Pan and the Lost Boys.

Blu and Jewel (the last remaining adult blue macaw species) now have kids of their own and are comfortably living in the city. However, Jewel fears that her children are behaving more like people than birds.

They decide to head back to the Amazon Jungle in Rio 2 for a more natural experience and it is there that Blu meets his long-lost father-in-law and his archrival, Nigel.

Maggie (Lindsay Lohan) yearns to be a NASCAR driver, but her domineering dad wants her to get a lucrative sportscasting job. When he takes her to a junkyard to pick an old Volkswagen beetle called Herbie, Maggie’s life changes forever.

Other Expiring Movies Include:

Make sure you catch these great movies on STARZ PLAY before they expire!