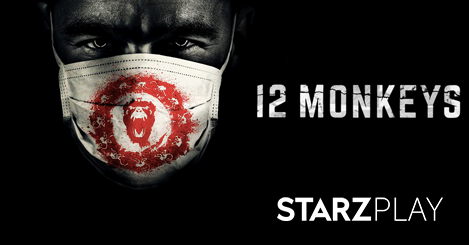 This exciting sci-fi series fromSyfy channel is based on the 1995 film by Terry Gilliam. The series features an astounding cast that includes Aaron Stanford as James Cole and Amanda Schull as Dr. Railly.

Traveling from 2043 to present day, Cole sets out to save the human race from a disastrous plague destined to destroy the world. Dr. Railly is an intelligent virologist and Cole’s partner in this mission. Together, they face seemingly impossible obstacles and come face-to-face with the devastation wreaked by the virus they seek to annihilate.

Sounds too good to miss, right? Well, if this narrative isn’t reason enough as to why you should tune in on STARZ PLAY, here are four more: Let’s face it: the narrative has already piqued your interest. That is because this story has every ingredient to draw the viewer in and keep them interested. Each week, the story grows while slowly bringing viewers closer to the mysteries they are eager to solve.

In season one, is it evident that the focus lies on stopping the virus; however, a big surprise awaits fans in season two. All the while, cryptic secrets can be found amongst the background, props, and scenery of any scene, just waiting to be discovered!

This series truly involves the viewers in an immersive form of entertainment. A New and Improved Remake It is not often that people say that a remake is an improvement over the original, especially when the original was already a great film. However, this series truly took the original content and became cleverly inspired with possibilities.

The TV series of 12 Monkeys allows the viewer to follow each beloved character of the film for a much longer period of time and witness their growth, future, and potential. It also allows viewers to experience the excitement of this post-apocalyptic world with every episode.

The 12 Monkeys Cast and Crew The 12 Monkeys cast and crew are both exceptionally likable by fans. They work hard to nurture a fun and interactive relationship with fans across their social media platforms by performing shout-outs, providing exclusive hints, and responding to questions and theories from fans.

This is a cast and crew that truly cares about their fans, and the fans appreciate them for it. When fans are able to more deeply interact with a show that they enjoy, it creates a more immersive experience.

Whether or not they were fans of the film or have never seen it, viewers will get hooked on this exciting sci-fi series instantly!