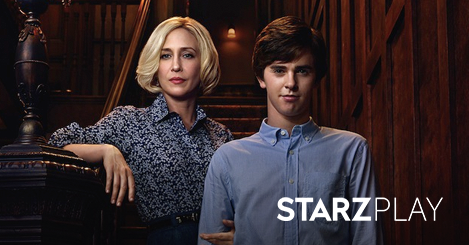 This thrilling horror show featured on A&E is a prequel to the Hitchcock film, Psycho, which was released in 1960. The Bates Motel series follows the story of young Norman Bates (Freddie Highmore) and his mother Norma Bates (Vera Farmiga), as Norman grows to become the killer portrayed in the original film.

As season 1-3 are now available on STARZ PLAY, you can watch the strange and intimate relationship between Norman and Norma evolve in White Pine Bay as they run the spooky Bates Motel.

But it doesn’t stop there, this hair-raising series is full of reasons why viewers should tune in. Although the Bates Motel series is full of very dark and twisted themes, it portrays a healthy balance of horror, humor, and appropriate content. The result is a surprisingly enticing story that keeps the viewer shocked, pleased, and interested without becoming too disturbing.

Viewers get to witness an intricate evolution of each character and their journeys through this twisted storyline, while the plot provides mystery, unforeseen changes, and unparalleled excitement. Unlike some series where it seems the story is beginning to die off due to an unplanned future, it is clear from the start that the creators of this series had a plan for the entirety of the show. Each season of Bates Motel fulfills part of the series’ intricate plan to coherently line-up with the story of Psycho, yet evolves its own ideas seamlessly.

With this intense, dark, and complicated cast of characters, it is definitely a challenging role for any actor. However, the cast of Bates Motel pulls it off phenomenally. Throughout the seasons, they appear to work in graceful harmony as a cast and carefully evolve alongside their character in the story.

Whether Or Not You’re a Fan of Psycho, You’ll Love it One of the best features of this show is that the characters, cast, and story are so strong that you don’t have to have seen the movie Psycho to understand the series, yet seeing the film may provide extra enjoyment since you know what the characters are going to evolve into. The Bates Motel series does an outstanding job of incorporating the themes from Psycho while building their own plot and character personas to reach the same end-point.

Episodes Are Easy to Watch and Enjoyable Unlike a series that has episodes that seem too long or too short, the episodes of Bates Motel are just right. With each being around 40-50 minutes in length, these episodes are long enough to quench your thirst for entertainment and short enough not to lose your interest.

Criminal Minds on STARZPLAY: A Decade of Seasons from Best to Worst