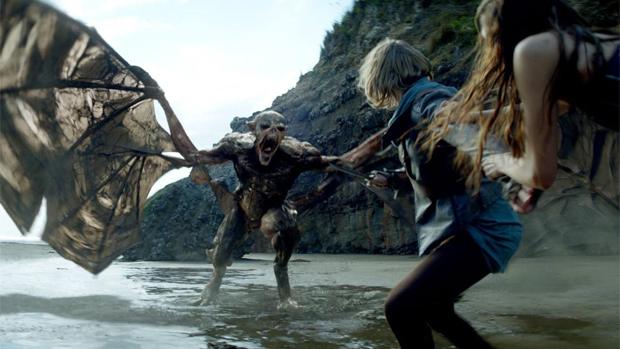 A Princess, a Druid, a Boy and a Thief

Our story starts with Elven Princess Amberle preparing for the Gauntlet, an all-male no holds barred race. The seven winners of the Guantlet will become the Chosen, guardians of the great tree Ellcrys. The tree possesses magical power and protects the world from a dark realm harbouring a demon army. After sneaking onto the race grounds and overcoming gruelling competition, Amberle becomes the seventh and last contestant to become a Chosen. Amberle’s celebration is cut short when she presses her hand against the tree and sees a horrible vision: A dystopian prophecy where the great tree is burned down and corpses are scattered across the landscape culminating with Amberle coming face to face with a demon. Far away, a druid sleeping on a snow-covered tomb is awaken by Amberle’s screams. He gasps for air, scrambles to his feet and regains composure after his long sleep. Summoning a magic sword from an empty hilt, he tells himself: “So it has begun”.

We cut to a village, Wil Ohmsford bids goodbye to his mother as she dies in his arms but only after she gives him his father’s magical Elfstones. After he bids her goodbye, Wil decides to move to a village of healers to become one himself. As he heads to the village, he is ambushed by a hungry troll looking for an easy snack. Luckily he is saved by a fierce woman named Eretria, who chastices Wil for wandering through Troll country alone.  For his own safety, Wil decides to follow Eretria as they make their way through the countryside. However, Eretria has her different plans in mind so she brings Wil to a house and drugs him while stealing his Elfstones.

Meanwhile the recently-awakened mysterious man makes his way to King Eventin, princess Amberle’s grandfather. He reveals himself to be Allanon the last of the druids and warns the king of the Ellcrys’ impending death. After reminding the King of the importance of the tree’s magic, he then rides off to find Wil and finds him incapacitated at Eretria’s house. Allanon reveals to Wil that he is a descendant of great warrior kings and magic flows in his blood. Allanon then offers to help Wil unlock his magical powers if he chooses to follow the druid and complete his destiny.

Following Allanon and Wil’s meeting, we are given a glimpse at the desolate world inhabited by demons. The Dagda Mor, a demon imprisoned by the Ellcrys, realizes that the tree weakens. He manages to send a Changeling, a devious creature able to change form at will, into the Ellcrys realm. The Dagda Mor commands the Changeling to finish off the Chosen of the Ellcrys and further weaken the tree.

Haunted by her nightmare-ish visions after touching the Ellcrys, Amberle decides to run away from the kingdom. In the woods, she runs into Eretria and in a twist of fate manages to steal the thief’s horse and food. She then rides to Wing Hove where she meets with the king’s sister Pyria. Meanwhile, Allanon and Wil visit the Druid Keep to search for the secret of restoring the Ellcrys. Wil is hesitant in helping Allanon find the codex to restore the book, until Allanon uses his magic to reveal its secret hiding place. Weakened by the magic, Allanon is attacked by the Dagda Mor inside his head abut manages to shake them off.

Using the codex, Allanon discovers that the Chosen are the key to saving the tree as the Changeling makes its way to the Ellcrys after taking Ambrele’s form. The Changeling kills all of the Chosen at the Ellcrys leaving the runaway Princess Amberle the last Chosen standing. Allanon and Wil set off to the Wing Hove to find Ambrele. The duo find the princess and Allanon is reunited with his former love Pyria that he abandoned when he became a druid. However the reunion is cut short when a Fury, one of the demons from Amberle’s visions, breaks free from the demon realm. After incapacitating Allanon, the Fury kills Pyria and then attacks Wil and Amberle.