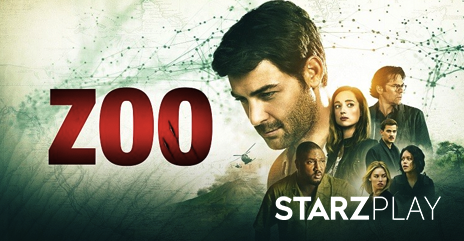 Lions and tigers and bears – oh my!

Take a show about animal attacks and add a science fiction flair with twists and turns around every corner, and that’s exactly what STARZ PLAY viewers get with Zoo.

Season 3 Has Been Wild Zoo is about animals who stage worldwide attacks on humans. The end of season 2 found a cure for their behavior, but it also caused the human race to become sterile. And it just gets wilder from there in season 3. Here are three reasons this season of Zoo has been the craziest one yet (spoiler alerts).

Ordinary animals attacks are so season 2. Season 3 brings a whole new level of fear as hybrid animals are now terrorizing the world. There’s also an evil plan in action to cause the hybrids to breed in droves and overtake the planet – with New York City as the first target.

What’s wilder than a plot to send hybrid animals around the world? The plan established to fight them off. The characters attach a beacon to a drone and fly it into an active volcano to draw a flock of hybrid birds away from New York City. It seems to have worked, but how they’ll prevent future attacks is anyone’s guess.

So far this season, viewers have seen a character everyone thought was dead turn up alive, that character being rescued, an abduction and murder tied to a pharmaceutical company’s plot, someone reveals she’s pregnant (remember the whole sterile thing?), and the previously mentioned hybrid attack scheme. That’s just a handful of the plotlines season 3 has provided, and it’s only halfway over.

What Will Happen Next on Zoo

The next big twist is anyone’s guess. But if the show stays true to its form, it will be wild. STARZ PLAY viewers should get on board and start watching Zoo right now. Because the craziest events are probably yet to come.