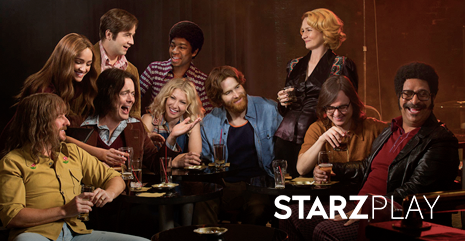 Can a show about comedians be serious? Turns out, it can.

More STARZ PLAY viewers are discovering I’m Dying Up Here – which highlights the darker, behind-the-scenes side of stand-up comedy. Why Audiences Need to Pay Attention

I’m Dying Up Here follows the story of aspiring comedians trying to make it big in 1970’s Los Angeles. While the series does have some funny moments, at its heart it’s a drama filled with emotion.

Here are three reasons viewers need to get up to speed right now.

This doesn’t mean the actors are portraying real people (although 1970s versions of Richard Pryor and Johnny Carson do make an appearance). The main stars of I’m Dying Up Here are fictional characters, but deal with the real social awkwardness and cutthroat envy up-and-coming comedians face as they fight for the spotlight. It’s beautiful to watch the characters jostle with their unique personal problems and transform them into sets that either kill or bomb.

Oscar-winner Melissa Leo plays the owner of Goldie’s, the hottest stand-up club in town. She’s who everyone is trying to impress, simply for a few minutes on the stage. She brings a level of passion and raw energy to her role that is sometimes lacking from the other characters.

3. Jim Carrey is an Executive Producer

Jim Carrey knows a thing or two about succeeding in the world of comedy. If there’s anyone viewers can trust to provide a realistic spin on the world of stand up, and throw in a few jokes along the way, it’s Jim Carrey.

Get on Board Before It’s Too Late

As the first season wraps up, viewers who haven’t discovered I’m Dying Up Here should add it to their list. Audiences never know what big plot twist – or punchline – the show will deliver next.