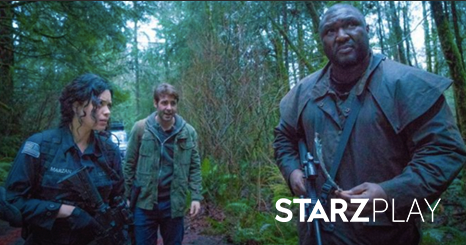 When STARZ PLAY viewers last saw Zoo at the end of Season 2, Mitch had sacrificed himself to the hybrids which allowed everyone else to escape the island of Pangaea and cure the animals. Unfortunately, this also caused the human race to become sterile. Fast forward ten years. The world population is dwindling and hybrids are now on the mainland.

Just when fans thought things couldn’t get any crazier, here comes Season 3. Viewers have already seen a handful of major plot twists to keep them on the edge of their seats. Here are the three wildest surprises so far this season (spoiler alert).

1. Mitch Is Alive After All

Mitch has been held for the past 10 years by the International Animal Defense Group, who is trying to get information out of him that they claim will help save the animals, stop the hybrids, and possibly save humanity. Clementine and Jamie eventually bust him out, but his memory is still a little foggy.

2. Abraham and Dariela’s Son is Abducted

The “government” shows up at Abraham and Dariela’s door to abduct Isaac. Viewers find out it’s supposedly part of an experiment that could solve the fertility crisis. Abraham and Dariela discover the CEO of a pharmaceutical firm named Leanne Ducovny is behind Isaac’s kidnapping, but she’s really after Clementine. And Abraham and Dariela appear to be plotting to turn her over in order to save their son.

3. Clementine Reveals She Is Pregnant

Speaking of Clementine, turns out she’s pregnant (which may be why Ducovny is after her). She keeps trying to find a good time to tell Mitch. This will likely be a big part of the show’s plot for the rest of the season.

So What Will Happen Next?

If the past is any indication, this show will keep viewers guessing about what crazy plot twist will happen in the next episode. Better get on board now before it’s too late.