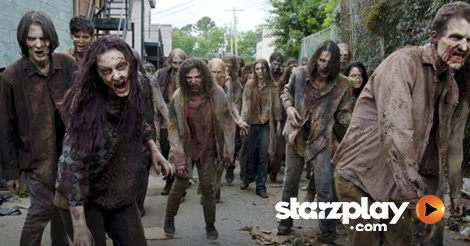 Halloween is right around the corner! To prepare you for this super-spooky holiday, here are rounded up four of shows to get you in the Halloween mood. Watch one show a day leading up to October 31st, or if you’re not heading out to a haunted house on Halloween night, why not grab some Halloween-themed snacks and have a spooky show marathon?

If you like your shows a little less scary and a little more humorous, try out this TV show sequel of the classic film series. The show takes place thirty years after the original series, and follows Ash Williams, played by Bruce Campbell, a wise-cracking man-child who accidently unleashes a deadly plague (again!) on humanity. The TV show follows him as he tries to save humanity from the Evil Dead one last time.

Do you like psychological thrillers? Then you will love Hannibal! The show follows the infamous Hannibal Lecter, but there’s a twist. The series takes place before Hannibal Lecter becomes the madman we know him as. At the time of the series, Hannibal Lecter is working as a criminal psychologist in New York City alongside FBI Special Investigator Will Graham, who will one day become Hannibal Lecter’s worst nightmare. It’s a dark show that really investigates one of the scariest characters in cinema history.

For fans of the traditional horror stories like Dr. Frankenstein and Dorian Gray, sitting down with the first few episodes of Penny Dreadful may be just what you need this All Hallow’s Eve. The horror/drama series follows Dr. Frankenstein, Dorian Gray, and many more ghostly characters, as well as an explorer named Sir Malcolm. The show follows all these characters as we find out where all these spooky literary characters really came from.

Do you love a good action flick but still want to be a little spooked this October? Look no further than the Walking Dead. The action/horror series follows a group of survivors as they face a zombie apocalypse in the United States. The drama is jam-packed with gripping twists and turns and exciting action that will have you on the edge of your seat. Plus, the show has been around for over seven seasons now- so you have many nights worth of great, thrilling drama to catch up on!