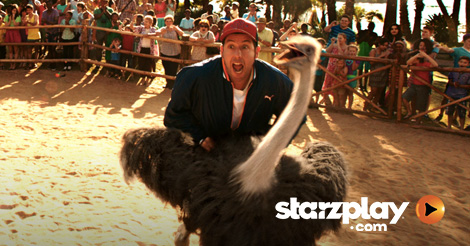 Comedian Adam Sandler has been tickling the ribs of movie goers since starring in the 1994 hit “Airheads.” His offbeat sense of humor and boyhood charm has made him a box office favorite, and he has a list of roles to prove just how endearing he is. When you’re feeling a bit down in the dumps, login to STARZ Play and let Adam cheer you up with any one of these classic comedies: Boy meets girl, who just happens to have amnesia. With no recent memory to speak of, Henry (Adam Sandler) has to convince Lucy (played by Drew Barrymore) why she should love him every single day. Released in 1998, Adam Sandler’s Bobby Boucher Jr. starts off as a stuttering misfit, who turns into the schools biggest football asset. The top-notch cast that includes Kathy Bates as Bobby’s mom and Henry Winkler as his coach will have you in stitches as they (along with Bobby) learn to cope with his new position as a high school hero.

Adam Sandler shines as Dave, a young executive with repressed anger issues. A case of mistaken identity on a plane lands him in court, where he is sentenced to “Anger Management” therapy with Buddy (played by the incredible Jack Nicholson). The hits – and laughs – keep coming, right up until the very surprising ending.

You Don’t Mess With the Zohan This 2008 hit is a black comedy which Adam Sandler produced as well as starred in. In it he plays Zohan Dvir, a former special forces agent who fakes his own death in order to style hair in New York. The flick hits on several hot political topics, allowing us to laugh a little at ourselves and our own prejudices. This 2014 romantic comedy brings Sandler back together with the endearing Drew Barrymore. This time they are portraying Jim and Lauren, a widower and divorcee who are thrown together on a blind date. Of course that’s a hilarious disaster, paving the way for a movie-full of giggles and gaffs.

Adam Sandler has made a very successful career out of his ability to make the world laugh. The next time you need to escape your own reality, jump into a Sandler flick on STARZ Play, and you are guaranteed to come out with your smile back on.