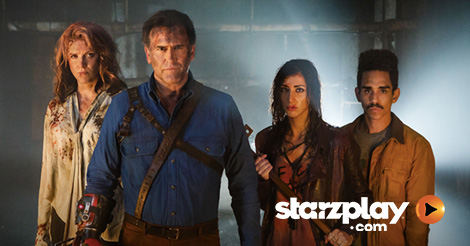 The second season of Ash vs Evil Dead, the chainsaw wielding zombie-hacking horror-comedy is currently airing same-time as US. The freshman season was “hailed for its command of its characters and gore” while embracing its action-packed gory roots so it was on everyone’s minds whether the second season would be as audacious as the first. As of the beginning of November, we are 5 episodes into the second season and the season is already being praised for staying true to the Evil Dead franchise’s roots. Here’s what the critics have to say: “It’s been nearly seven months since Ash vs Evil Dead Season 1 wrapped up, but mere minutes into the Season 2 premiere, it feels as though you’ve never left.” “Campbell brings his A-game as always, handling the steady stream of smirks, one-liners, and action scenes with ease.”

“Ash Vs. Evil Dead delivers this mayhem with gutsy results.”

“In its opening episodes, the second season has pushed the bar even higher, thriving with stunning practical effects and garish violence that will leave the most die-hard horror freaks running for soap and water.”

“There is no greater moment that sums up the Evil Dead franchise than what we see in “The Morgue.” “It was creepy, nauseating, funny, maddening and pure torture for Ash.” “It’s so over the top and unexpected that it can’t not be in, arguably, the franchise’s top 3 moments.”