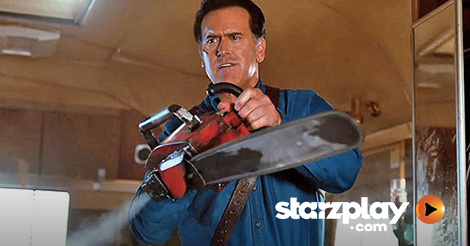 Bruce Campbell is both a loveable oaf and a chainsaw wielding badass. There are a ton of reasons why we love Campbell, and these five are only a few. Ash vs Evil Dead is available to watch now on STARZPlay.com. You can see Campbell’s epic zombie fighting skills for yourself and fall in love with his charm. The biggest reason why Bruce Campbell is so awesome is because he is a staple in the Evil Dead franchise. Campbell has been with the Evil Dead since the beginning in 1981, when the very first film was released. This franchise is a classic for many avid horror fans, and it just would not be the same without Campbell.

Have You Seen Him with a Chainsaw? Bruce Campbell has proven that a chainsaw can be used for more than just pruning and cutting down trees. He has shown us that this landscaping tool can be repurposed for mowing down hordes of undead assailants, and he looks good while doing it.

He is Still Looking Good in His 50s When Bruce Campbell starred in the first Evil Dead film in 1981, he was a young heartthrob that won the hearts of many. He may be older now that it has been over thirty years since the first film, but he has definitely aged gracefully. Campbell may no longer be young, but now he has the look of a handsome gentleman.

He is Always Well-Dressed Bruce Campbell is not Just an Actor Bruce Campbell’s talent is not limited to just acting, he is also a director! He has directed multiple films. He even directed a film that is a spoof of his own career called My Name is Bruce. There is no end to what Campbell is capable of doing.