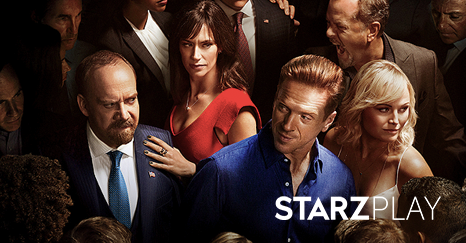 The Emmy and Golden Globe stars of Billions are coming back for the Billions Season 2 highly anticipated premier.

Winners Paul Giamatti and Damian Lewis will be back for more drama, politics, and the glory of power in New York’s high finance world. This season the two will be back on track with their destructive course to outmaneuver and overpower one another. The Huffington Post first released the new teaser for Showtime’s award-winning series, and the trailer is all about exploring things outside of conventional. The show has always focused on the theme of morality, and Season 1 will carry over into Season 2 with an in-depth look at each character’s past.

Most people know the characters, and they love and hate them at the same time, but this season they are going to dive even deeper into the characters and build the back stories that are what made these two who they are today. During an interview on CBS This Morning, Paul Giamatti talked more about his role as U.S. Attorney Chuck Rhoades, the man desperately trying to take down the hedge fund guru Bobby Axelrod.

When Season 1 ended, Chuck was dealing with his life, which was in shambles. The case he had built against Axe (Bobby Axelrod), had done nothing for Chuck’s career, but it had done plenty to his personal life. Chuck’s wife separated from him, and his career filtered into a prosecutorial misconduct investigation.

The personal turmoil that each character exhibits in the show draws you closer, and it makes you ready to jump in and help or get excited that the one you were against is going down.

New Characters to Join the Show Billions Season 2 will also bring a host of new faces to the screen. Putting Taylor (Asia Kate Dillon) joins the animals of Axe’s killing floor and works hard to disrupt the atmosphere Axe has created.

Christopher Denham will play Chuck’s new inquisitor. Oliver Drake, Denham’s character, will appear as a villain in the show with his aggressive tactics, but no one will know his real motives likely until the end of Season 2.

Some speculate that Chuck’s children may make an appearance, finally, in the show. After all, they have been in the house with both parents, but no one has seen them on screen yet.

Some guest stars will also join the cast, including James Wolk who will play Craig Heidecker, another tech billionaire.

Vying for Control in a World of Moral Controversy The most exciting thing you can expect from Billions Season 2 is the controversy. You will still see both vying for control in a world that is a threat to them both, whether they know it or now. It is all about choosing between their extinction or becoming something great. This season, we are guaranteed to see someone’s path for the future a little clearer.