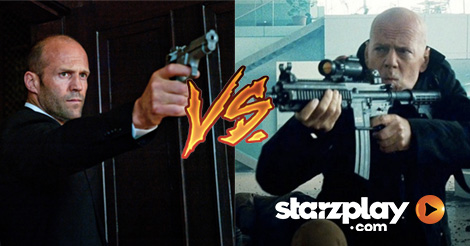 Both Bruce Willis and Jason Statham are pretty tough guys in real life, but what if they had the same skills as in some of their best roles? Check out our winners in these four categories, then stream some of the movies to decide for yourself:

Have you seen Willis’ famous diner face-off scene in Looper? Joseph Gordon-Levitt tries to pull a gun on Willis’ character (his older self) but is immediately incapacitated and pulled down over the table. Willis also goes over the top with his hand-to-hand combat skills in Pulp Fiction, where he accidentally kills a guy during a match he was supposed to throw.

However, Statham may take the lead in The Expendables, where his martial arts skills are on full display. Willis also stars, but Statham’s hand-to-hand swift takedowns are hard to beat. Throughout his films, Statham displays a wide variety of weapon skills. He can find a weapon in almost anything, from tire irons and knives to chairs and the shirt off his back. Willis, meanwhile, is perhaps best known for his skills with guns. A simple handgun can wreck more havoc in Willis’ hands than much more extreme firearms in someone else’s.

When a serial killer begins targeting cops, who should take the case? In Blitz, Statham is the fearless cop will to do whatever it takes to hunt down the killer. Going back to Pulp Fiction again, however, does Willis take the lead? He is never afraid of a fight, and not one to back down. Willis is undeniably tough, but have you seen Statham in Parker? For starters, his character looks like he could be made from bricks, and manages to survive being left for dead. He is daring and ruthless throughout the film, proving his strength and toughness.