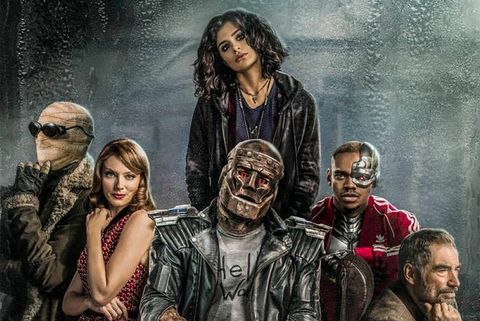 Weird, outcasts, outlandish… Nothing can describe this weird band of misfits better. DC & STARZPLAY’S latest TV show, the Doom Patrol showcases superheroes who don’t look like superheroes even in the slightest as they take on the bad guys.

Adapted from the DC universe’s superhero pack, the imaginary retelling of the story of crusaders in other words misfits has met with a phenomenal response from the critics and audience alike.

The first season introduces Diane Guerrero who packs a great punch with her eccentric portrayal of Jane, a young woman with 64 distinct personalities, each having a traumatic past of their own. The gorgeous April Bowl as Rita Farr, a former Hollywood Actress turned monster is a perfect embodiment of a vain and poised heroine of the 1950’s who is trained not to lose her composure. Until hell hath fury as Rita Farr scorned! The villainous madman and the narrator of the first season,  Mr. Nobody played by Alan Tudyk, Larry Trainor as Matt Bomer a victim of an air force operation gone wrong, Timothy Caulden as The Chief and the genius mind behind the Doom Patrol, Joivan Wade as Victor “Vic” Stone / Cyborg and last but not the least, the witty Brendan Fraser as Cliff Steele!

The series first season captures the Doom Patrol’s trials and tribulations as they fight Mr. Nobody to free the Chief from his evil clutches and the second season explores a darker side without losing any of its nuttiness!

Is the Doom Patrol doomed forever? Can this weird family of outcasts ever agree on anything? Watch Season 1 & the first five episodes of Season 2 streaming NOW on STARZPLAY at the same time as the US!

Don’t forget to tune in to a new episode of the weirdverse every Thursday!

GET READY TO BE SPOOOKED… AMERICAN HORROR STORY STREAMING NOW ON STARZPLAY!