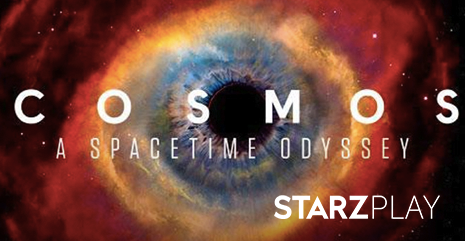 Anyone with an interest in the cosmos has a great show to check out.

Famous astrophysicist Neil deGrasse Tyson stars in this highly anticipated Cosmos reboot. The series puts the focus on galactic revelations and questions about the universe.

Now, the first season of Cosmos: A Spacetime Odyssey is available on STARZ Play! Great for lovers of documentaries and science, this show is popular for both educational and entertainment purposes. What are the truths about the universe? Can the mysteries of the cosmos be solved? Now viewers can get these questions answered from the comfort of their own living room!

The History of the Cosmos Series The Cosmos series is one that lovers of science may have heard of. Carl Sagan, the show’s original host, was one of many popular scientific minds who helped bring new information to the general public. Tyson will continue in this footsteps with this revamped version of the show.

Sagan’s version, Cosmos: A Personal Voyage, was considered a great leap for scientific documentaries. The format and spirit of the show remain the same, by bringing in a popular contemporary figure in the scientific community. The show has connections to the original beyond its format – season 1 of Cosmos: A Spacetime Odyssey is written, directed, and produced by Sagan’s widow, Ann Druyan.

While elements like “Ship of the Imagination” and “Cosmic Calendar” will be carried over, the latter will be updated to match modern information.

What to Expect in Season 1

The first season of a show lays the groundwork and makes a big impression on viewers. This program was designed to appeal to a broad audience, and early episodes discuss details about the Milky Way. In addition to showing viewers about the Earth’s cosmic address, information is also given about the patterns of development across species.

In addition to technical facts about the world and the universe, the series will also discuss the details behind scientific discoveries and the reaction toward said discoveries in the past. One episode discusses the unique relationship between Sir Isaac Newton and Edmond Halley. Another will cover the inventor Michael Faraday, who created the motor and the generator.

Landmark discoveries like the scientific method, strategies for calculating the Earth’s age, and even the largely mysterious concept of dark energy will all be covered by Tyson, giving viewers a broad understanding of concepts and historical figures that contribute to an understanding of the cosmos.

Check Out a Cosmic Adventure!

The cosmos are always an interesting topic, albeit a sometimes-overwhelming one. Those who appreciate educational television and scientific documentaries will be glad to see this monumental reboot of the classic series.

Finding out about the universe has never been easier than it is now. With a well-known mind in the scientific community hosting the series, viewers will enjoy a concise and well-thought-out program brought to life by a famed expert in astrophysics.