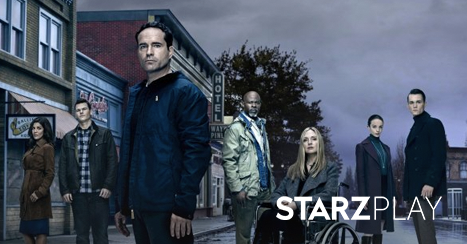 Lovers of mystery and science fiction have a treat coming their way – STARZ Play will now offer Wayward Pines Season 2!

This American series is based on the Blake Crouch novels of the same name. With Chad Hodge handling development and famed director M. Night Shyamalan helping with production duties, the show has a stacked cast – even behind the camera.

After its first season performed well, the show was renewed and the plot has continued to grow and evolve. With new characters coming in and many memorable scenes captivating viewers, Wayward Pines is becoming a top show to watch for. Now, users of STARZ Play can enjoy season 2!

A Spooky and Engaging Premise The first season of Wayward Pines set an interesting premise upon its debut. Wayward Pines manages to mix in the spooky and eerie atmosphere a mystery series should have with some exciting and fast-paced story development.

The show is based on a U.S. Secret Service member Ethan Burke conducting a search in the disappearance of multiple agents in the small town that is the show’s name. The show quickly creates a unique and spooky atmosphere, showing the main character trapped and unable to leave the small town – a fate also shared by the residents.

With an electric fence surrounding the town and the local sheriff ruling through intimidation and violence, Burke must find the only agent who has survived.

The second season of Wayward Pines shows the struggles of Dr. Theo Yedlin, a surgeon who is stuck in the battle between powerful groups waging war for control in the enigmatic town. The spooky foundation and compelling premise makes for a great edge-of-the-seat viewing experience.

A Rejuvenated Cast and Premise

Wayward Pines Season 2 had a big performance to follow with the first collection of episodes being very well-received. After the ten-episode first season, the show was effectively done. However, the popularity of the series led showrunners to renew it.

The second season saw the entrance of several new cast members, with some taking over previous roles and some playing new characters to the series altogether.

The surprising success of the show created significant buzz, further growing the fandom of this imaginative series. The mysterious location, symbolism, and large number of three-dimensional characters has earned Wayward Pines a number of award nominations concerning both the show itself and the actors.

STARZ Play is excited to offer Season 2 of Wayward Pines, providing lovers of the mystery and action genres with one of the hottest and most talked-about programs in the genre.

Sometimes a series can grow beyond its anticipated success levels when directors, actors, and story premises all combine to create a great result. This is the case with Wayward Pines, and Season 2 ramps things up with new faces, new conflicts, and new twists to keep viewers guessing through each episode.

Use STARZ Play today to enjoy the hit that is Wayward Pines!