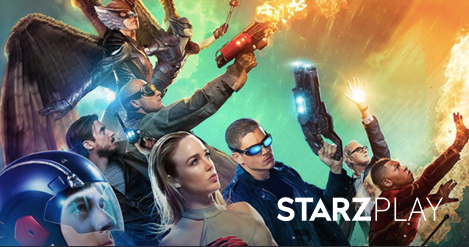 The entire first season of “DC Legends of Tomorrow” is available on STARZ PLAY. This new generation of heroes and villains band together at the urging of Rip Hunter, a time traveler determined to save the world from an apocalypse. Rip recruits The Atom, Hawkman, Hawkgirl, Firestorm, White Canary, Heat Wave, and Captain Cold to save Earth and its timeline from Vandal Savage. The show features both classic and new characters from the DC world; here’s a breakdown of all their powers. A classic superhero who started in the 1940s, the “DC Legends of Tomorrow” version of the Atom is a man named Ray Palmer who invents the ATOM suit after his fiancé is killed. The suit allows him to shrink to molecule-sized stature and gives him the ability to fly, as well. The show decided to stick with the very first original version of Hawkman, which is an archaeologist named Carter Hall who discovers he is the reincarnation of an Egyptian prince and is able to harness the power of flight. Kendra Saunders learns that she is the reincarnation of Egyptian priestess Chay-Ara. When she is finally able to access her powers, Saunders becomes Hawkgirl by sprouting wings from her back, along with stellar fighting skills. Firestorm is technically two people, Jefferson “Jax” Jackson and Professor Martin Stein. Firestorm is able to fly, fire fusion energy from their hands and the create elements out of thin air by changing the molecules. Although she has no special superpowers, White Canary has incredible fighting skills and a lot of rage due to the fact she has no soul since she was resurrected from the dead. Her training with the League of Assassins has made her a powerful hero. An arsonist and career criminal to the core, Heat Wave wields a gun capable of burning just about everything it touches. Captain Cold has always been a villain in The Flash’s storyline, but in “DC Legends of Tomorrow,” Captain Cold is given a good side and helps the team in stopping Vandal Savage. As the name suggests, Captain Cold’s powers come from a freeze gun. The leader of the team is from the future and has the power of time travel.