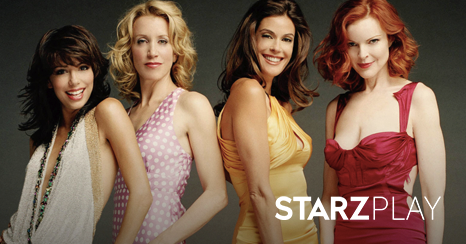 Set in the quiet and beautiful street of Wisteria Lane, Fairview, Desperate Housewives revolves around the lives of four women who juggle relationships, careers, and family life. It also airs their dirty laundry as their hidden truths are revealed, deep secrets are uncovered, and their long-term friendships put to the ultimate test.

Behind the façade of perfect lives, klutzy Susan is a divorcee and a mother to a rebellious teenager. Bree is Fairview’s Martha Stewart whose perfect personality masks major imperfections. Lynette is married with four boisterous kids. And Gabrielle is an ex-model whose still yearns to live her glory days.

Looking down on all this is Alice, who committed suicide but leaves some comments on the lives of her not-so-perfect neighbors.

The “happily ever after” contemporary take on Desperate Housewives is most probably inspired by great films like the American Beauty. The TV show has also been likened to other TV series such as Sex and the City, Twin Peaks, and Knot Landing.

If you loved these shows, then you’ll definitely love watching Desperate Housewives on STARZ PLAY.

Desperate Housewives begins with Mary Alice leaving what seemed to be the perfect home in the loveliest of suburbs. Now, from her elevated P.O.V., she walks us through her friends’ lives, neighbors, and family.

We get to know the involvement of her son and husband in her death as well as the lives of the women of Wisteria Lane and their husbands – Carlos (Gaby’s husband), Tom (Lynette’s husband, Rex (Bree’s husband), and Mike (Susan’s new love interest).

There’s only one place to catch Desperate Housewives this November, and it’s on STARZ PLAY.

Don’t miss out on the romance, drama, and comedy that these four protagonist women have to offer.