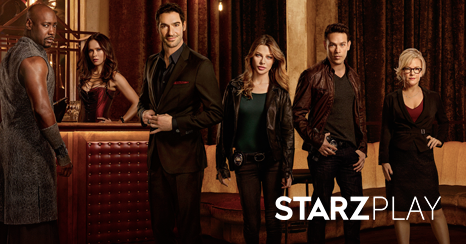 This series is about Lucifer, is an evil entity who takes on a human form to live on Earth as a nightclub owner.

His supernatural abilities allow him to bring out people’s deepest desires, which is something that ends up being useful when he starts helping the Los Angeles Police Department solve crimes.

The show’s premise sounds ridiculous: a cop drama-comedy that features an evil entity from the underworld, but its novelty has made it extremely popular and addicting to fans everywhere.

Here are five reasons to be excited for season one of Lucifer on STARZ PLAY. One of the reasons people get so addicted to Lucifer is because of all the witty puns.

Lucifer makes several tongue-in-cheek comments to his police buddies and other humans on earth, always alluding to the fact he’s from the underworld but never fully giving it away.

The rest of the cast has pretty witty dialogue, too. Lucifer and Chloe, one of the cops he works with, have great chemistry. The writers of this show do a fantastic job with the writing, which is a key part in keeping people coming back episode after episode. This is one of the Welsh actor’s biggest roles so far, and it has gained him quite a bit of popularity. Ellis does a fantastic job playing the devilishly handsome Lucifer, and his snarky but charming comments leave fans wanting more.

He brings a great complexity to Lucifer; even though he’s technically evil, he develops emotions as he helps the LAPD solve crimes and forms friendships with the cops. Fans can’t help but love this antihero, and they will warm up to him more and more with each episode.

Lucifer has the potential to be just another procedural cop drama-comedy, but the creators of the show have made a truly unique television series. They manage to mix the supernatural with the cop theme in a way that’s highly entertaining and actually works while still being novel. The crime part is exciting and interesting, the comedy is good, the drama and relationships are intriguing, and the supernatural element is fun without being overbearing.

Another interesting thing about the storyline is that it’s based slightly on the comic book series The Sandman. For people who enjoy superheroes and comic books, Lucifer will be an interesting series. The supporting characters in Lucifer are just as interesting as the main character, which is important in creating a great show. Fans love the cops as well as Lucifer’s fellow supernatural pals, and all of the characters bring complex storylines and elements to the show. The series often explores topics around religion, the supernatural, and human nature— all three of which are deep topics that people enjoy discussing. The series is enjoyable to watch, but will also leave fans with interesting themes to think about and discuss later with friends.

Watch season one of Lucifer now on STARZ PLAY!