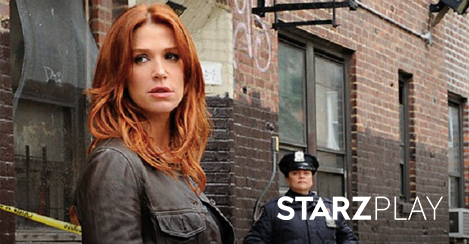 The procedural cop drama Unforgettable has been added to STARZ Play! In this CBS original series, a New York Police Department detective named Carrie is both plagued and blessed with hyperthymesia – a condition that allows her to remember everything. It’s more than just a photographic memory, as it allows Carrie to also remember sounds, smells, and other sensory triggers. When the show starts, Carrie has given up her detective days but rejoins her ex-lover Al’s team to help solve murders, including Carrie’s sister’s murder.

Here are five reasons to watch the first two seasons of Unforgettable now on STARZ Play! Carrie Is A Badass

As if it’s not cool enough that Carrie is a cop, she’s also a badass because she seeks thrills. A part of her condition is that adrenaline helps her in not remembering things that happen. Because of this, Carrie gambles in underground casinos to make money and temporarily shutoff her ability to remember everything. Although Carrie is an honest cop, she does break the rules. In one episode, the audience gets to see Carrie go all cowboy cop on someone when they harm an innocent person. Carrie’s personality also makes her a total badass.

Yes the show is procedural cop drama and therefore has a new case each episode, but it’s unlike any other cop show out there. The cases are interesting, and thanks to Carrie’s hyperthymesia, adds an almost supernatural element to each case as she remember details to help solve murders. Alongside the cases Carrie and Al solve, Carrie is also on the search for her sister’s killer. Despite her ability to remember everything that happens in her life, Carrie can’t seem to remember the exact details of her sister’s murder.

The show illustrates Carrie’s memory by having whatever she remembers happen in real time alongside her. She’ll be standing in a kitchen in present time, but the memory she remembers will be happening right there in the same room with her. Audiences often get to see two Carries in the same room, which adds a really cool cinematic element to the show.

Hyperthymesia is a real condition, and people with the medical phenomenon have even been featured in different television specials and interviews. The show actually hired a woman with hyperthymesia to help them write and direct the show so that the medical condition could be portrayed accurately and believably at all times. Many shows make up unbelievable abilities or scenarios simply to have a unique storyline, but Unforgettable does a great job of remaining responsible and ethical in portraying this real medical condition.

Two exes working together always makes for interesting television, and Unforgettable is no exception to this classic story element. Because of Carrie’s condition, she has a nearly impossible ability to “forgive and forget” but is willing to put aside her differences with Al in order to solve her sister’s murder and other murders in NYC. Their relationship leaves fans wondering the whole series if the two will end up together again.

Watch Seasons 1 and 2 of Unforgettable now!

What to Expect in Season Two of The Girlfriend Experience