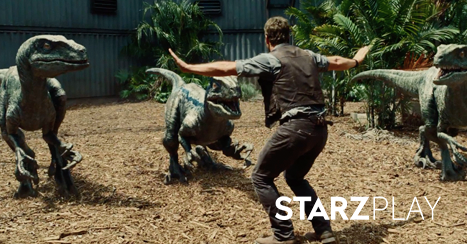 November does not get any better than this!

The latest installment in the critically acclaimed franchise, Jurassic World, is set to air on November 1st on STARZ PLAY. The award-winning film features amazing actors such as Chris Pratt, Vincent D’Onofrio, and Bryce Dallas Howard.

In this new movie, you’ll get to experience the Tyrannosaurus Rex in a brand new and thrilling perspective. However, the T-Rex is no longer the biggest and “baddest” dinosaur in Jurassic World, we have other humongous and ruthless beasts.

22 years after the destruction and subsequent closure of the original Jurassic Park, a new park has been built to relieve visitors of their insatiable craving of seeing dinosaurs.

And to make more people visit the billion-dollar park, scientists have ignored the rulebook and created new genetically modified dinosaurs of all shapes and sizes.

Will the park live up to its hype or will it face a similar fate as the original park? Will the dinosaurs be controlled? Tune in to STARZ PLAY this November to find out.

The Dinosaurs are Even More Epic

The producers of the new Jurassic World film really outdid themselves, particularly in the cinematography. Everything looks so real and life-like, you’ll feel like you’re part of the movie.

This is the ultimate action adventure movie film of all time. So reschedule your plans for November 1st because that’s the day you’ll be visiting Jurassic Park courtesy of STARZ PLAY.

Jurassic Park is Back This November on STARZ PLAY

If you loved the previous Jurassic Park films, this one will blow you away. Step into the amazing and terrifying world of dinosaurs this November only on STARZ PLAY.

Movies Expiring on STARZPLAY This November