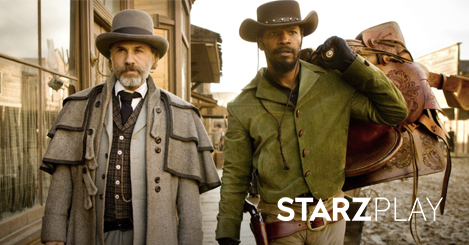 Some movie gems will be leaving STARZ PLAY by the end of February. Don’t miss out on your chance to tune into a blockbuster hit or classic flick before it is too late:

This animated comic book adaptation pits the Dark Knight against his own unruly son. A son who had been kept secret from him until the boy had become a violent pre-teen.

Fun for the whole family, “Big Hero 6” is a band of high-tech heroes who take it upon themselves to save the city of San Francisco from a devastating event. Jamie Foxx is brilliant as the freed slave who is determined to liberate his wife from an evil plantation owner played by Leonardo DiCaprio. Despite being a remake of a ‘80s cult classic, “Robocop” 2014 is an excellent action flick that has viewers clamoring for a sequel. This 2012 romantic comedy follows four women who have found a way to use a man’s relationship advice against the men in their lives. Things heat up when the guys find out and try to turn the tables on their ladies. It’s man and woman against a big bank in this high-stakes thriller from 2009. Clive Owen and Naomi Watts play the globe-trotting detective duo who stop at nothing when it comes to putting an end to the bank’s illegal (and deadly) transactions. When a bounty hunter is called upon to apprehend his ex-wife, he gets a lot more than just some sweet revenge. The delightful Jennifer Aniston is the perfect leading lady trying to outsmart the debonair Gerard Butler. The “Daddy Daycare” crew is back, this time after school lets out. It’s up to them to give the kids a summer they’ll never forget, while not losing their shirts in the process. This a must-see movie for fans of Adam Sandler/Drew Barrymore on-screen romances. In this 2004 blockbuster, Henry has to convince the forgetful Lucy that she is in love with him over and over again. The alternate universe that “PRIEST” resides in is one full of savage vampires who have kidnapped the Warrior Priest’s niece. Only his small group has the courage to face them down and rescue the girl before she becomes a vampire.