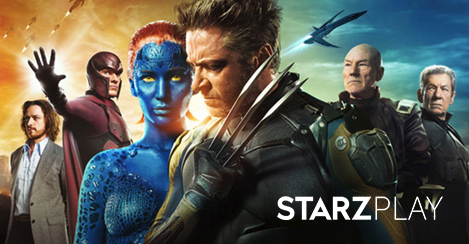 Instead of Spring cleaning, STARZ PLAY has decided to do some Spring adding! Here are 47 new movies coming in April. This dramatic movie features an all-star cast, and is presented as the sequel to the 1987 Wall Street. The movie centers on Gordon Gekko, a used-to-be Wall Street hotshot who was sentenced to jail for insider trading and fraud. Now out of jail, Gekko forms an alliance with his daughter’s fiancé, an ambitious investment banker, to heal their broken relationship.

This was one of Pixar’s most successful and unique movies. Although the movie has barely any dialogue, it still tells a beautiful story about an adorable robot named Wall-E and his adventures with another robot named EVE. In the film, Wall-E and EVE try to save Earth and the human race.

The Marvel universe came out with the X-Men: First Class franchise in 2011, and X-Men: Days of Future Past is the second installment in this heart-pumping, action-filled mutant saga. Jennifer Lawrence, Michael Fassbender, James McAvoy, and Patrick Stewart are just a few of the amazing actors that bring this story to life.

The sixth installment in the Fast & Furious franchise opens with the gang very rich and retired after their successful heist in Rio De Janeiro at the end of the fifth movie. However, they are still fugitives and unable to return home. In order to return and clear their criminal history, the gang must take down a mercenary group.

This movie is a continuation of the famous Bourne universe, but this time it features Jeremey Renner instead of Matt Damon. In The Bourne Legacy, a special ops agent must go on the run after the public exposure of Operation Treadstone.

Set in Japan, a group of outcast samurai decide to take revenge on the man who was responsible for their leader’s ritual suicide.

This musical is based on the novel of the same name, and tells the dramatic story of a man in 19th century France, who is on the run after he breaks parole to lead a prosperous life.

Spring has brought in plenty of movies for STARZ PLAY viewers to enjoy!