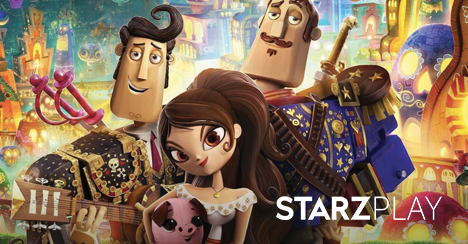 New STARZPLAY Shows and Movies to Watch in September

Each month, STARZ PLAY viewers are treated to a variety of new hit movies and shows.

September is no exception with a handful of great options set to debut on STARZ PLAY.

5 New Shows and Movies Viewers Need to Check Out

From family comedies to horror, there’s something for everyone this month on STARZ PLAY. Here are five new shows and movies viewers won’t want to miss.

A horror film about cyber bullying that appears shot entirely on a teenager’s computer screen, Unfriended is about a group of teens who discover a mysterious user involved in their online group chat – roughly one year after their friend’s suicide. An animated story set in Mexican folklore, The Book of Life is about a man who dies in hopes of being reunited with his true love in the Land of the Remembered. But he must conquer his greatest fears before he can find happiness.

3. Night at the Museum: Secret of the Tomb The third and final movie in the Night at the Museum trilogy, Night at the Museum: Secret of the Tomb stars Ben Stiller as a security guard who must travel to London to return an ancient tablet which allows museum exhibits to come to life. Adam Sandler stars as both the lead male and female characters in Jack & Jill, a comedy about fraternal twins. Jack has always been the more mature twin, but his patience is tested when Jill ruins Thanksgiving dinner. One of Jim Carrey’s darker comedies, The Cable Guy is about a television technician who becomes friends with one of his customers. But the friendship is tested when the technician begins interfering in his friend’s life.

Get the Popcorn Ready

These five movies are just a sample of all of the great options coming this month on STARZ PLAY. There is a full list below of new shows and movies viewers can see in September.

The Fox And The Hound

The Book of Life

Night at the Museum: Secret of the Tomb

Just Go With It

Catch These Flicks Before It’s Too Late