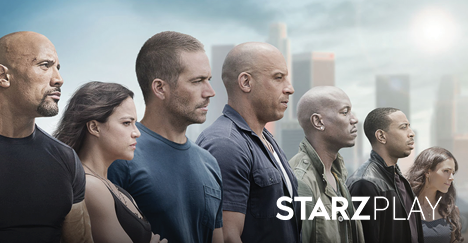 Ready for Action? Check These 5 Movies Off Your Must-See List

Who doesn’t love a great action movie to get the adrenaline pumping?

Fortunately for viewers, STARZ PLAY is coming strong with new action and adventure flicks in September.

Car chases, epic battles, and explosions – audiences will find it all on STARZ PLAY. Here are five action films viewers won’t want to miss this month. The crew of street racers reunites in Furious 7 to take down the brother of an international terrorist who is out to kill each member of the team. A government agent offers to help, but only if the crew rescues a kidnapped computer hacker. A former Roman soldier is disgraced and kidnapped, then forced to battle for his life in gladiator arenas. In Gladiator, Russell Crowe stars as the warrior looking to get revenge on the emperor for murdering his family. A Quentin Tarantino classic, Inglourious Basterds follows a band of American Jewish soldiers during World War II who hunt down and brutally kill or torture German Nazis. The group teams up with a German actress in an elaborate plot to take down Hitler. Another action flick starring Russell Crowe, Robin Hood brings a modern twist on the popular folk story. This movie tells the story of how Robin Hood went from a friend of the crown to an outlaw hunted throughout the kingdom.

In The Kingdom, terrorists attack and bomb an American oil company’s housing complex in Saudi Arabia. A team of FBI agents is called in to help find the terrorists, when their convoy is attacked and one of their members is taken hostage. The group now battles to save their lives, as well as the life of their fellow agent.

Get Ready for the Action

Sit back, turn up the volume, and get ready for these great action and adventure movies available in September on STARZ PLAY.

Catch These Flicks Before It’s Too Late