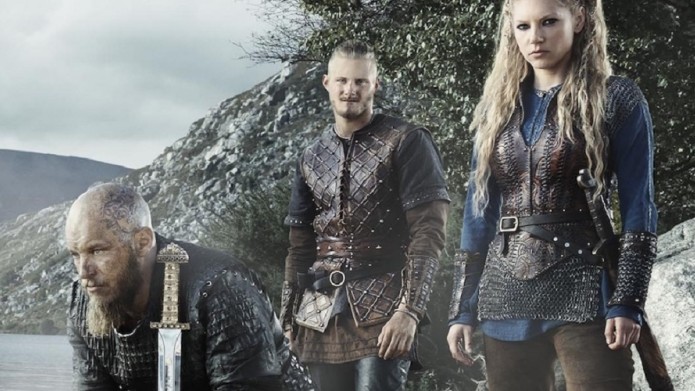 Like a viking army charge against a wall of defenders, Vikings Season 4 wastes no time in starting things off with a bang. Loyalties will be tested and betrayal will be spoken about but most importantly players will take decisive action to cement their loyalty or defiance to their kings, allies and people. Let’s take a closer look at the first episode, “A Good Treason”:

Season 4 starts with two prophetic visions unveiling what is in store for the Lothbrok dynasty. In a dream sequence, Ragnar finds himself at the great gates of Valhalla, however he is denied entrance. Meanwhile Queen Aslaug finds out that Ragnar’s successor will be a woman. To Aslaug’s dismay which woman will become heir is not specified leaving it possible that someone other than her may usurp the throne.

A recurring theme in the first episode is loyalty and Vikings shines by making it a complex issue rather than an unchangeable article of faith . Bjorn is loyal to his father but wants to step out of his shadows and show himself a capable leader. With Ragnar still in ill health, he arrest Floki for Athelstan’s murder. Despite Athelstan being a Christian among pagans, Bjorn reiterates the importance of his role in helping the vikings in capturing Paris. Floki in the meantime believes his crime protected Ragnar and the vikings from Athelstan’s Christian influence and feels no remorse for his actions.

The relationship between Aslaug and Ragnar has detoriated and she half-expected Ragnar to never awake from his illness. In the meantime she has kept herself amused by purchasing the asian slave Yidu, an exotic addition to her northern realm household. Her amusement in finding Yidu foreshadows that the slave will play a role in one of her future machinations. Ragnar awakens from his illness and is furious to find out that Bjorn has arrested Floki. What’s even worse he finds out that his ambitious brother Rollo has been left to his own device in Paris instead of having him return home.

Rollo’s loyalty to Ragnar has been a topic constantly revisited throughout Vikings but this time around Rollo finds himself at the cusp of power that may rival that of his younger brother. Rollo has become a Frankish king and taken Paris as the seat of his kingdom. To seal his legitimacy, Rollo has taken a Frankish princess for a bride in a Christian ceremony. The scenes of Rollo as a king in Paris are fascinating as his rough ways clash with the Parisian sensibilities that surround him. However his new domain is starting to take influence on him. The Rollo of old would have raped his defiant new bride but instead he is amused by her belligerence and when she puts a knife to his throat he just leaves her be.

In Hedeby, Earl Kalf announces to the settlement that he wants Lagartha to rule with him as equals despite having betrayed Lagartha before. Thee gesture touches Lagartha especially after Ragnar denied her rule as an equal before and replacing her with Aslaug. Kalf’s decision is questioned by some within his circle and they ask for Lagartha to be stripped of her power. Kalf retaliates by having the disobedient group executed by crossbow fire while leaving their leader to Lagartha and her knife.

Meanwhile King Rollo learns that the viking troops left behind are not happy with his embracement of Frankish religion and are unwilling to fight for Frankish interests. He is asked to ride into the viking camp to address the men and reach a settlement. Rollo instead shows up with an ambush of Frankish crossbowmen and knights. He executes the whole viking camp: men, children and women.

Ragnar’s reign and the loyalty of his friends and family will be seriously questioned this season. Aslaug is busy with her own plans after her love for Ragnar has diminished. Bjorn is desperate to prove his worth and has left the settlement for a sabbatical in the wilderness. Meanwhile Floki’s betrayal has upset Ragnar and without Asthelan he is left with  no trusted advisors. Most importantly however is that Rollo has finally crossed the line of no return. The season is set up for an epic showdown between Ragnar and Rollo, something that has alluded fans through previous seasons.  Hopefully Ragnar will met out some true justice against his brother and avenge his fallen viking comrades.