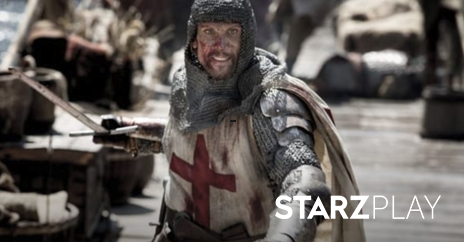 After a strong debut, Knightfall spices things up with the introduction of several intriguing subplots that open up the already tangled main plot which brings the state and the church into direct conflict.

The second episode of the first season gathers the Knight Templars in France with a mission to find the church’s most prized possession, the Holy Grail.

After Godfrey’s death, Landry (Tom Cullen) is officially made the leader of the Templar Knights and this move is quite uncomfortable with him. However, he tries his best to settle in this important role, especially after the King promised him that he’ll bring Godfrey’s killers to justice.

Because of his now powerful position, Queen Joan summons Landry to have a private meeting with her to discuss the state of affairs in the kingdom.

Also in the second season, Pope Boniface finally arrives and gets to see the glass stone that was found in the late Godfrey’s sword in the previous episode. He also wants the Holy Grail found and has instructed the knights to search everywhere for it, even inside Godfrey’s dead body.

Even though this is considered sacrilege in the Templars laws, they agree to perform a medieval autopsy on the body and surprisingly find a mysterious key. As a result of these events, Landry decides to miss the important meeting with Queen Joan.

Even though it’s still finding its footing, this historic TV show has made tremendous progress and established strong subplots in just the second episode. Knightfall definitely has a lot in store for us.

Catch all the latest episodes on STARZ PLAY.