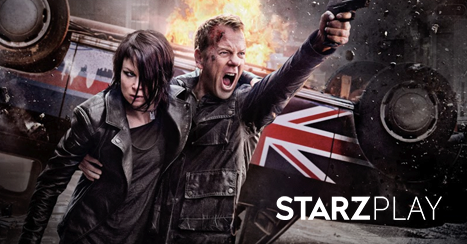 “24” was one of the most unique shows of the early 2000s simply because of its format: each season took place over 24 hours, and each was a heart-pounding race against the clock for Jack Bauer, who took on terrorism and espionage, kidnapping plots, bombs, and various villains throughout the tenure of the show.

However, the format of “24” also heralded both its best and worst seasons, as the same elements that made it a hit were also what boxed it in and made it occasionally tired and formulaic.

Here at STARZ Play, we’re looking back at all eight seasons and the miniseries (which, strangely enough, collectively amount to nine days of Jack Bauer’s life), ranking them from worst to best.

Season 6 suffered from a plot that had been recycled one too many times (nukes and terrorists – surprise, surprise) as well as the writers’ inability to figure out where they wanted things to go after they had whipped out the major components too early in the game. By this time in the show, most of the original cast had been killed off, leaving us with few characters to care about as well as the same old tired plot conventions. The only factor that keeps season 8 from being the worst in the whole stack is the surprising ending.

Season 4 is when the premise of “24” started to lose its novelty and ingenuity – you could set your clock by the familiar plot points we were starting to see repeat themselves, including Jack going rogue, a mole in CTU, and more bombs belonging to Muslim terrorists. The season that started it all is, surprisingly, not the show’s best. The first episode is a stellar one, but only after it successfully aired was the rest of the season picked up by a network. The remaining 12 episodes are a little underwhelming, and essentially repeat the drama of the first episode.

Season 7 saw the return of some of the show’s old brilliance after a decidedly lackluster season 6, but, in the end, the writers tied themselves up into knots with a plot that ended up being too complicated. Season 3 threw some interesting twists into the story, including a heroin addiction for Jack, a willingness to kill off established characters to move the story into new territory, and an expert portrayal of Jack’s emotional exhaustion – even after he saves the day, he still has to pick himself up and get back to work. What should be numbered as the series’ 9th season is a reboot that transfers the setting to London but keeps the real-time formulation. It also saw the return of many major characters, which was refreshing and fun.

In season 2, the show hit its stride, mixing a perfect amount of twisty plot with the harrowing timeline that made most moments breathless with urgency. “24” truly hit all the right notes in season 5, perfecting its plot twists so that each one felt totally unexpected but completely plausible.

Re-watch all of the show’s seasons on STARZ Play and see where they rank for yourself.