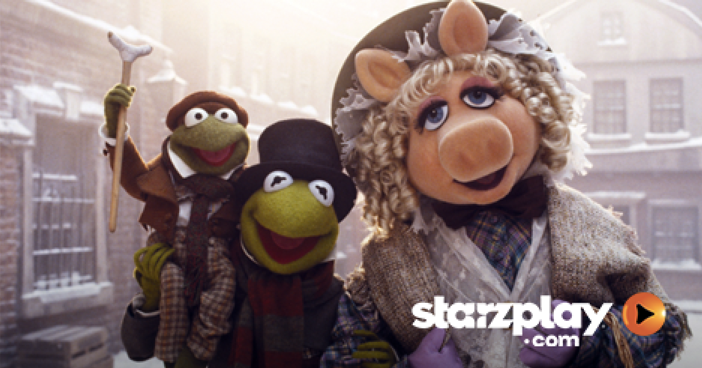 Whether trimming the tree or wrapping the gifts that go under it, having a Christmas movie playing in the background is a wonderful way to invoke the feelings of the season. STARZ Play has a number of classic and original Christmas stories in their roster that will tug on the heartstrings of even the hardest humbug. Starring Tim Allen as a reluctant St. Nick, “The Santa Clause” is a series of Christmas movies that explore the world at the North Pole. In the first, viewers discover how a divorced dad falls into the role of children’s favorite saint, while the next two installments are based around his home and life with the hard-working elves. Three full length Christmas features back-to-back will instill Christmas joy in the entire family. In true Muppet style, this adaption of a Christmas classic is full of music, dance and of course laughs. The legendary Michael Caine stars as Scrooge, while Kermit the Frog is the humble Bob Cratchit and of course Miss Piggy his wife. The combination of live actors and puppets works superbly for the classic story, reminding all who watch it about the value of family and the true meaning of Christmas.

I’ll Be Home for Christmas Taking its title from a beloved carol, the 2016 “I’ll Be Home for Christmas” is a heartwarming family tale. Single mom Jackie (played by Mena Suvari) is struggling to balance her home life with her career as a successful Assistant District Attorney when her estranged father, Jack (played by James Brolin) shows up on her doorstep for Christmas. Family love and loyalty is tested, with a sweet Christmas ending to warm the spirit. Hard times has made Ginny Grainger (played by Mary Steenburgen) lose her Christmas spirit. Luckily, an angel named Gideon (played by Harry Dean Stanton) comes down to earth just in time to restore her and her family’s belief in Santa, and the Christmas spirit. This is an original story that touches the heart and makes viewers want to hold their loved ones a bit closer. This 2009 adaptation of Charles Dickens’ famous book is a bit darker than other retellings, yet still marvelous to watch for the holidays. The talented Jim Carrey takes on multiple starring roles, including all of Scrooge’s facades and those of the three ghosts that haunt him. The story of a crotchety old man who needs help in regaining his love for Christmas is one that will never grow old during the holiday season.

Put out the eggnog and Christmas cookies and gather the whole family together. STARZ Play is packed with enough Christmas joy to tickle the spirit of everyone. Spread that joy around for a holiday season that is full of happy surprises.

Vikings Season 4B: How Do Ragnar’s Adult Sons Stack Up?