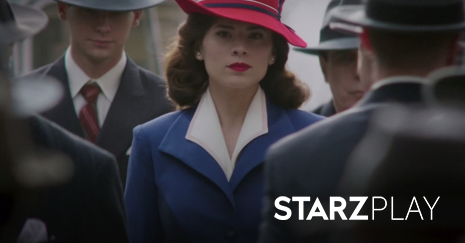 After a thrilling first season, it was only right for the producers to come up with the second season of the critically acclaimed Marvel’s Agent Carter.

The show has seen its fair share of success and has been nominated severally for different award categories such as the Visual Effects Society award and the Hollywood Makeup Artist and Hair Stylist Guild award.

STARZ PLAY has made it possible for you to enjoy the second season in the comfort of your home.

Just like the first season, the second season will put you at the edge of your seat and glued to the screen.

The visual effects are at a whole new level, the storylines are better and more engaging, and the fighting scenes are even more epic. The show’s star, Perry Carter, is still a sweetheart but more badass. You’ll just love it!

Find out how our favorite heroine faces new challenges in her personal life and nerve-wracking job in Season 2 of Agent Carter only on STARZ PLAY.

You should be excited to learn that most of the season one cast will return to the show’s second season. Expect to see Hayley Atwell (Perry Carter), Enver Gjokaj (Sousa Daniel), Chad M. Murray (Jack Thompson), and James D’Arcy (Edwin Jarvis) to grace your screens.

Catch All the Episodes of Season 2 on STARZ PLAY

Agent Carter Season 2 has a total of ten episodes and they are all available on STARZ PLAY. So set a date and enjoy the drama, thrill, and action that Agent Carter has to offer.